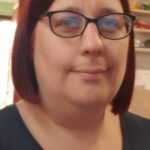 Claire Sheldon’s debut novel, Perfect Lie,  is published by Ruby Fiction on e-book on 16th June, so I thought it would be nice to catch up with her so she could tell us about her road to publication and what she has coming up next.

My book is about a girl called Jen and her family, whose past comes and haunts her when a body of a woman turns up in the town of Long Eaton. DI Chris Jackson and his team are called to investigate. No one knows who the woman is but then they get a hit on her DNA. Jen’s past is now knocking on her front door and she has to make the choice between promises once made and the life she has built up for herself.

The ruby-lit team have done an amazing job with the “official” blurb, as it really doesn’t give much away and keeps the reveals of the book hidden until the reader turns the page.

How did you come up with the idea?

I have watched a lot of crime dramas over the years, The Bill and Spooks especially. I also read a lot of procedural crime novels which I love. So with my television loves and a little bit of day dreaming Jen and Chris were created. Jen who was at the height of her career, but then she did the one thing she never thought she would and fell in love. As for Chris he is also working his way through the police ranks, having been brought up on the same stuff I was. He joined the police on his 18th birthday and never looked back.

Tell us about your journey to being published

While I was writing my book I signed up for Womentoring, which was a scheme where women supported other women in their writing, I was luck enough to be picked up by Rachel Burton. She set me on my way towards publication, but it has been a long slog! After a false start and many of different versions from what I originally wrote I submitted to Choc-Lit after they were recommended to me by one of their other authors and I was lucky enough to be signed in December 2019.

Are there any authors that you are particularly influenced by?

After picking up reading again thanks to C L Taylor and Mark Edwards, their work – though not crime –  and wanting to be able to write like them has been a big influence. And when it comes to Nottingham crime Rebecca Bradley and her Hannah Robbins series. There are so many authors that I look up to and want my writing to be as great as theirs.

How did you feel when you found out your book was going to be published?

I had already been here before and then I was proper bouncing off the walls! So this time round every point I’ve been waiting for it all to fall apart… My initial meeting with the team at Ruby-lit, the contract, the announcement, part of me is still worried that it won’t make it over the finish line on the 16th. So fingers crossed 😊

Do you have any tips for aspiring writers?

I know a lot of authors say this but keep going and don’t give up! Because you will make it in the end. I have also found that reaching out to other authors whose work you admire will also drive you on. Most of us are friendly and enjoy interaction with people who have read our books, as there is nothing like feedback from a fan.

Have you any more books in the pipeline?

Book two is written and is currently with the publisher, Chris and Jen will be back and some of the other characters who are in book one.

I am attempting to write book 3 as we speak..

You can buy the book from these websites

Claire lives in Nottingham with her family, a cat called Whiskers and a dog called Podrick.
She suffers from Multiple Sclerosis and as a result of the disease had to reduce her hours working in insurance for an Insolvency Insurer. This spare time enabled her to study a creative writing course which inspired her to write her debut, Perfect Lie.
When Claire isn’t working she enjoys reading crime novels and listening to music – the band Jimmy Eat World is her biggest muse! Claire is also an avid reader and book blogger. The inspiration for her novels comes from the hours spent watching The Bill with her grandparents and auntie; then later, Spooks and other detective programmes like Morse, A Touch of Frost and Midsummer Murders.