LOST IN TRANSLATION
I have been dancing salsa for four years now, and there is always something new to learn, a move to improve on, some styling to add. But there is one element of the dance that has defeated me; my as yet unconquered frontier. My Salsa Everest.

It is a part of salsa that despite the very best teaching over the past few years makes my eyes glaze over in panic and all my sense of rhythm and timing run for the door. But I know now that it is a recognised condition. The technical terminology for it is: Allthelights- Areonbut No-one’sathome- itis, commonly known as shine blindness

During the lesson it all appears to go in: I concentrate VERY VERY hard, watch the teacher, listen to what is being said and done, and then attempt to translate it carefully from my mind to my feet. And sometimes it appears to work, but only for the duration of the class. Then, as if by magic, as if Paul McKenna has clicked his hypnotic fingers and said “And Now You Will Forget EVERYTHING”, I Forget Everything.

There are four main explanations for this:

my brain, come up with a Cuban turn, then concentrate – if you look closely you’ll see the seed of a shine flicker in my eyes like a faulty lightbulb – it flickers and then dies, phhht – then I smile apologetically and do a couple of Suzee Q’s, which sort of peter out a bit, look at the floor, mutter, “I’m finished,” then pull myself together and shriek, “I’m sorry, shines are not my best subject, hahahahahah ha, mmmm” people not suffering from Shine Blindness 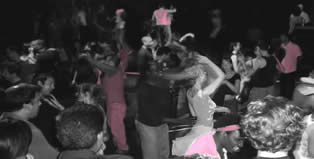 BUT I have finally tired of this: going out and watching others and their little intricate foot patterns, their wiggles and flicks and confident smiles.

I HAVE DONE SOMETHING ABOUT IT, AT LAST, OH YES I HAVE…. my glazed eyes, panicked fixed smile and endless Suzee Qs have just been replaced by a knowing flick of the hair, a bewitching grin, and a five minute foot riff – well, hopefully anyway.

I had a private lesson with Yolande Lewis, eh viola, da da, I have learned a shine and it has gone into my brain and stayed there. Give that woman a medal – The Victoria Cross for Patience above and beyond etc etc

So, if you see someone executing a rather cute and stylish little shine, then breaking into a spontaneous round of applause for herself – its is me.

After all, it has been four years, four whole years….

Now, what do i need to work on next..