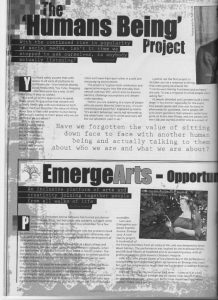 With the continued rise in popularity of social media, isn’t it time we stopped to ask ourselves, is anybody actually listening?

You could safely assume that with access to all sorts of platforms  to communicate – from mobile phones, social media sites, You Tube, blogging – that everyone has a way to tell their story if they so wished.

But with all of this opportunity to speak, there comes no guarantee that anyone will actually listen, and with our reliance on technology, have we forgotten the value of sitting down face to face with another human being and actually talking to them about who we are and what we are about?

This is something that Lynette Curtis, the co-ordinator of the Humans Being project, is recreating. This community story telling project encourages people to get together and listen and learn from each other in a safe and encouraging environment.

The project is a “grass roots celebration and appreciative enquiry into the everyday business of common life”, which aims to dissolve barriers, challenge assumptions and deepen understanding.

“When you are speaking in a room of people who are purely there to listen to you, it’s overwhelming and powerful,” explained Lynette. “It’s ancient behaviour: we’re not reinventing the wheel here – we sit in circles and story tell like our ancestors used to do.”

Lynette ran the first project in October 2011 as a response to things that were going on around her.

“Friends were feeling frustrated and unheard,” she said. “It was a response to what people were asking for.”

18 people attended and Lynette built a little stage in her kitchen especially for the event. Five people spoke and time was factored in afterwards for questions. Some people left with more questions than answers, some have gone on to try new things, and one person left their job and started another one as a result of participating in Humans Being.

The idea is to listen to people properly and have the opportunity to learn from those you may not encounter otherwise and actually find out about them and what’s going on inside, rather than making assumptions about what they are like based on what they do for a living and how they look.

“It’s really a dialogue project,” said Lynette. “It’s about valuing people’s space and it’s a two-way process – the listening is as important s the speaking.

“Unless you belong to a club or therapy group, where do people go to get that unconditional attention?”

Artist Aoife, who attended the first meeting said of the experience, “I learnt a lot and sorted out some thoughts in my head. So worthwhile, simple, real and easy.”

And photographer, Tim Vogt, said, “No mush, no lip-service, no mystic visions – just a real window with a different view of the world in front of me.”