Insecurity: A soap opera with nobs on 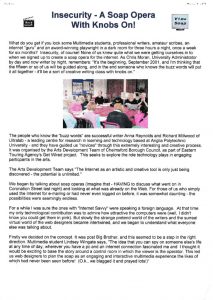 Insecurity : A Soap Opera With Knobs On! By Chris Penhall

What do you get if you lock some Multimedia students, professional writers, amateur scribes, an internet “guru” and an award-winning playwright in a dark room for three hours a night, once a week for six months?  Insecurity, of course! None of us knew quite what we were getting ourselves in to when we signed up to create a soap opera for the internet. As Chris Moran, University Administrator by day and now writer by night, remembers:

“It’s the beginning, September 2000, and I’m thinking that the fifteen or so of us will be guided along, and in the end someone who knows the buzz words will put it all together – it’ll be a sort of creative writing class with knobs on.”

The people who know the “buzz words” are successful writer Anna Reynolds and Richard Millwood of Ultralab – a leading centre for research in learning and technology based at Anglia Polytechnic University – and they have guided us “novices” through this extremely interesting and creative process.

“The Internet as an artistic and creative tool is only just being discovered – the potential is unlimited.”

We began by talking about soap operas (imagine that – HAVING to discuss what went on in Coronation Street last night) and looking at what was already on the Web. For those of us who simply used the Internet for e-mailing or had never even logged on before, it was somewhat daunting – the possibilities were seemingly endless.

For a while I was sure the ones with “Internet Savvy” were speaking a foreign language.  At that time my only technological contribution was to admire how attractive the computers were (well, I didn’t know you could get them in pink). But slowly the strange pretend world of the writers and the surreal virtual world of the web designers became intertwined, and we began to understand what everyone else was talking about.

Firstly we decided on the concept. It was post Big Brother, and this seemed to be a step in the right direction. Multimedia student Lindsey Wingate says, “The idea that you can spy on someone else’s life at any time of day, wherever you have a pc and an internet connection fascinated me and  I thought it would be exciting to base the story around a control room in which the viewer is the operator. This led us web designers to plan the soap as an engaging and interactive multimedia experience the likes of which had never been seen before!  (O.k., we blagged it and prayed lots!)” We talked about pretend people doing pretend things and did it very seriously (“We don’t have enough sex – I mean in the script”. “Joan wouldn’t say ****”.  “She would say **** if she saw something like that,” and how it could be presented in an entertaining and engaging way using the technology available to us.

We had to think about how fast it could all be downloaded, and what limitations we had to work within as well as the story itself. Far from specialising in one aspect, we all wrote the script and discussed how it could look on a computer, leaving the actual building and design of the site itself to the experts (i.e. the multimedia students). Suddenly, the talking was over: it was time to actually make our soap opera.

We were all assigned our own roles within the production team – casting, sound recording, locations, props, filming, acting, web site building, running around, moral support and tea. There were some pretty strange sights on the streets of Chelmsford throughout February and March, I can tell you, as we filmed our characters actually coming to life.

And as I’ll never get to make an Oscar speech, this will have to do:  we couldn’t have done it withouth Anna, Richard, the actors (who did it for free) the people who let us film in their premises (for no money) and Spencer Clark of Chelmsford Borough Council and his CCTV room staff who let us look at their screens on many occasions.

As our writing co-ordinator, editor and general “muse” Anna Reynolds says, “It’s been an exciting and challenging project, with many surprises and learning curves along the way.  I’m privileged to have worked with such an energetic, imaginative and diverse group of artists.”

Now its finished.  And we know how it ends.  You’ll have to log on to find out. As someone once said:

Here’s a link to the original http://www.naec.org.uk/ultralab/ww3/projects/onlinesoap/