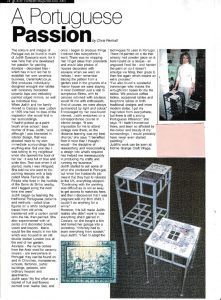 The colours and images of Portugal can be found in much of Judith Dawson’s work, for it was here that she developed her passion for painting azulejos – decorated tiles – which has, in turn, led her to establish her own ceramics business, CeramicArt.co.uk.

When Judith and her family moved to Cascais near Lisbon in 1995 she had no idea of the inspiration she would find in her surroundings.

“I hadn’t picked up a paint brush since school”,  says  mother of three, Judith, “and although I was interested in interior design, that was directed more to my own immediate surroundings than anything else.  But one day I was talking to my neighbour when she opened the boot of her car – it was full of blue and white tiles.  That was when it all started, really.  I was intruiged.  She told me she went to tile-painting lessons with a lady called Maria Fernanda de Feijota who lived in the foothills of the Serra de Sintra nearby, and I tagged along the next time she went.”

Judith began by learning the traditional Portuguese patterns and methods – cobalt blue figures on a white background traced from old prints, transferred with a carbon pencil onto the tile, then painted.  She also experimented with oil paints and decorated bowls, vases and teapots.  Maria would fire the results in her kiln which was housed in an old double decker London bus at the end of her garden.

Azulejos – the name comes from the Arab word for ceramic mosaic – are everywhere in Portugal: they can be found on and in Churches, monasteries, schools, factories, public buildings, palaces and ordinary houses and apartments.

Judith says, “My first effort was a basket of fruit and flowers painted over twelve tiles, and once I began to produce things I noticed tiles everwhere I went.  There was no stopping me!  I’d get ideas from postcards and would take photos of houses decorated with azulejos when we went on holiday.  I even remember tracing the pattern from a garden seat in the grounds of a manor house we were staying in near Coimbra!  Just a visit to sumptuous Sintra, with its palaces and azulejos would fill me with enthusiasm.  And of course, we were always surrounded by light and colour.”

Encouraged by her new-found interest, Judith embarked on a correspondence course in interior design.  “It was impossible for me to attend college over there, so the distance learning was my best chance,” she says.  “I benefited from it more than I thought I would – the discipline of researching and incorporating a design into what’s required has helped me immeasurably in producing my crafts and running my business.”

Judith started to sell some of what she produced in Portugal, but when her husband’s job meant tht they had to relocate to the UK, everything stopped.

“Continuing with tile painting was difficult as it’s not so easy to get access to materials here, and then I discovered that I was pregnant with my third child, I couldn’t do anything for a while.”

However, this lull made Judith realise she didn’t want to lose everything she’d gained in Cascais, so she bought a kiln and turned her garage into a workshop.  “I literally had to learn everything from scratch,” says Judith.  “I had to adapt the techniques I’d used in Portugal.  There I’d painted on a tile that already had powder glaze on it; here I paint on a bisque  – an unglazed fired tile – and harden the paint on so it doesn’t smudge via firing, then glaze it, then fire again, which means an extra process.”

“I’ve also found a wonderful ironmonger who makes the wrought iron bases for my tile tables.  We produce coffee tables, occasional tables and telephone tables in both tradtional designs and more modern styles.  I get my inspiration from everywhere, but there is still a strong Portuguese influence,” she says.  “If I hadn’t moved out there, and been so affected by the colour and beauty of my surroundings, I would probably have never even started painting.”

Published in The Craftsman Magazine in 2002