Rugby on the dance floor 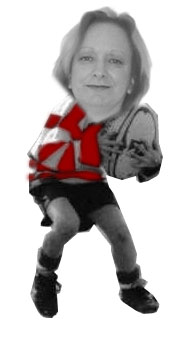 As the Welsh celebrate winning the Grand Slam, and my mum has a go at me for not being excited enough – yes, I am Welsh, and no, I don’t like rugby (not too keen on close harmony singing, either) – I got to thinking: some Friday’s I go out in my sexy salsa dress and my sexy salsa shoes, and I come home with more bruises on my leg than a fly half after a scrum.

Are Salsa and rugby the same???

The evidence
Three weeks ago I ventured out; my dancing was, shall we say, a little less disciplined than normal, and my respect for the personal space of other dancers was, well, minimal. Whilst dancing, I managed to punch one 6ft partner on the forehead – I am 4ft 11, so I think that’s impressive -; I also managed to head butt him, and lightly slap some other poor man in the mouth. I have also managed in the past to step on the feet of innocent people sitting nearby.

But it’s not just me:

Come on, we’ve all done it; stamped on someone’s foot and watched their eyes water as they carry on dancing stoically, if not sexily, pretending it didn’t happen and certainly didn’t hurt;
Had our arms almost wrenched from their sockets during a miss-handled spin, and sobbed real tears inside;
Hit someone hard in the face when we were trying to impress them with our vibrancy and styling.

Instead of Close harmony singing about patriotism and little saucepans (Sospan Fach), we get sexy vibrant music with intricate rhythms, but also possibly about little saucepans (poco cazo) Well, my Spanish is limited. Sorry.

Instead of a try -scored through teamwork, skill, and speed whilst dodging around the opposing team, we get a dance with the King of the Club achieved after weeks of Look At Me!! Dancing, attempted eye contact and ruthlessness, whilst dodging around opponents (sorry, other potential dance-partners.)

And instead of a Tackle.oh, I do that anyway

HOWEVER, THERE IS ONE MAJOR DIFFERENCE
Alcohol
Have you ever been out in Cardiff the night before a Rugby international?? I have. A few years ago, now, but has left a heavy, heavy imprint on my memory.
Picture the scene – I am on a night out with a group of friends in an unfamiliar city, I am in a crowded bar; the slowest moving (an most visible, due to my bright red leather coat) member o the pack, I get separated from the herd, I look up. Some man has clamped himself to my mouth. From no-where. It was like something out of Alien..deda deda deda dedadedadeda.or Jaws, more like…

I brutally unclamped him, pushed him behind me, and continued on my nonchalant way. (actually, I DISCARDED him – it was like that dance sequence with Gene Kelly and Cyd Charisse in France. Fantastic.) Oh, the power, coupled with bewilderment and concern that it may have been the REALLY odd looking one in the kilt by the bar.(there were a lot of odd looking ones by the bar..)

No Alcohol
Compare this to a recent Congress with dedicated Salseros from all over the world. I was Feeling Good. I was Looking Good. I was Dancing Good. So Was He.
For 4 and a half minutes, we were caught up in our own wonderfulness; I span, I wiggled, I FLIRTED. He styled, he shined, he was good. Then, about to launch into his big move, his piece de resistance.. he accidently punched me in the mouth.
I span, I wiggled, my eyes watered. I think he wanted to cry.
The Spell was broken.
The record finished.
We walked off in different directions – 4 and a half minutes of salsa heaven, followed by 30 seconds of pain, suffering, and tears.

(Maybe that’s what playing rugby’s like, actually, after you’ve scored a try; hit the heights; then you miss conversion, and have to bloody do it all over again..)

I never saw him again. I think he was hiding.

IN CONCLUSION
As contact sports go, Salsa wins hands down -or rather up, styled and vibrant.
My great grandfather won two caps for Wales. He’s probably secretly pleased, though, that my rugby genes are obviously getting an airing every Friday night.

Do you think I’ll be allowed back over the Severn Bridge?