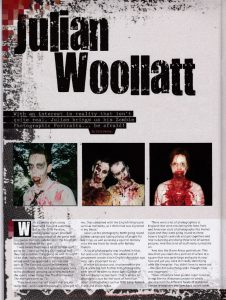 With an interest in reality that isn’t quite real, Julian brings us his Zombie Photographic Portraits…be afraid!

With a Zombie Walk along Southend Pier and a Zombie Ball at the Cliffs Pavilion, photographer Julian Woollatt was way ahead of the game with his Zombie Portraits exhbibition at the Pouch of Douglas in Westcliff last year.

“I was aware there was a lot of Zombie stuff going on.  I went to the Big Chill festival and they had a zombie thing going on and I thought I’d do that,” explained Southend-based Julian, whose work has appeared in publications such as The Face and Guardian Weekend.  This interest in reality that isn’t quite real goes back to his childhood growing up in Weymouth in the 1960’s when things like The Prisoner and The Avengers were on TV.

“They were externalised places that are not really real…and it was that unreality that got to me.  That, combined with the English fairground carnival mentality, so I think that was ingrained in my blood.”

Julian cut his photography teeth going round holiday camps and taking photos of people for key rings, as well as taking a squirrel monkey onto the sea front for shots with holiday makers.

“A lot of photography was involved in that, but also a lot of theatre, the whole kind of amusement arcade kitsch English thing that was very, very important to us.”

A move to London and involvement in the Punk scene led him further into photography, after which he went to West Surrey College of Art and Design in Farnham.  That is where he developed a love for the work of American street photographers such as Fritz Lang, Robert Frank and Diane Arbus.

“There were a lot of photographers in England that were emulating this New York and American style of photography like Homer Sykes and they were going round to these bizarre English carnivals and get togethers and Morris dancing doing these kind of surreal pictures.  And that kind of stuff really turned me on.

“And also the Diane Arbus portraiture.  This idea that you could do a portrait of a face in a square that was quite large and quite in your face and yet you were still really identifying with the character.  You didn’t have to move out – the face did everything, and I thought that was important.”

Looking at Julian’s website, you can see this fascination for the theatriccal and other-worldliness in the portraits he’s done, including a selection from the Portchester Hall Drag Ball to the Lewis Bonfire Carnival.

The Zombie Portraits extend these ideas further, and that surreality of The Prisoner and the kitsch of the fairground carnival world that touched Julian in his childhood combined with the anything-goes dark theatricality of punk, all meld together to portray a fascinating “alternative world” that people are compelled to make for themselves.

To see Zombies and Julian’s other work, visit https://www.facebook.com/JulianWoollattPhotography